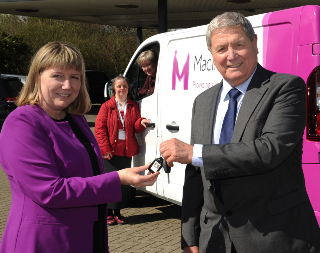 Additionally, Activa Contracts has adopted MacIntyre, a sector-leading national charity that provides learning, support, education and care to children, young people and adults with learning disabilities, complex needs and autism, as its charity of the year.

Activa Contracts has delivered a full outsourcing vehicle leasing and fleet management solution to MacIntyre, which is also headquartered in Milton Keynes, for more than a decade.

The fleet of 70 vehicles comprises 50 wheelchair-adapted vehicles and minibuses and 20 company cars supplied on contract hire with full maintenance packages with a range of other service provided that include daily rental and fleet consultancy.

Hill said: “Having been a client of the company for more than 10 years, Activa Contracts decided it was time to return the goodwill in support of the charity’s golden jubilee year in 2016.

“As well as pledging to fundraise for the charity throughout the year with a series of events, Activa Contracts is also donating the vehicle for MacIntyre’s use for six months. All the charity will need to do is fuel the van.”

To date Activa Contracts’ employees have raised almost £2,000 for the charity. Members of staff are also raising funds by running in this year’s London Marathon and Birmingham Half Marathon, walking Hadrian’s Wall and a fierce competition is expected to find the company’s star baker in its own ‘Bake Off’. Additionally, the business is supporting MacIntyre at its annual golf day at Woburn Golf Club on 28 April.

MacIntyre’s head of fundraising Claire Kennedy said: “By getting involved Activa Contracts is raising funds to support our ongoing work helping adults and children with a learning disability live fulfilling and meaningful lives. A massive thank you is due to the whole team at Activa Contracts.”