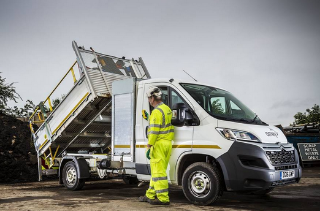 Based on Citroën chassis, they were built by new supplier Bevan Specialist Products and are specified with its Safe-T-Drop system, which is designed to eliminate any risk of a fall from height by operatives working on the vehicle bed.

The patented Safe-T-Drop rails can be easily folded away for loading and unloading, and are strong enough to withstand impacts from other vehicles such as fork-lifts. Raising the dropsides has also been designed to be quick and simple. They can only be closed with the Safe-T-Drop rails in place, ensuring correct use of the rails at all times.

In addition to their tipping bodies, the 16 new vehicles have storage lockers immediately behind the cabs and 250kg capacity SwingLift miniloader cranes by Penny Hydraulics.

Meanwhile, Bevan Specialist Products has supplied Amey with a further 19 Renault 3.5-tonners. These are all dropsiders and also fitted with Safe-T-Drop systems. Twelve are traffic management vehicles with rear-mounted light boards. They wear a Highways England livery and are used to assist with mobile – as opposed to static – lane closures, which minimise disruption to traffic.

The remaining seven are based in Scotland, where they are assigned to Amey’s Forth Road Bridge project. Three are short-bodied mobile workstations, tool pods and, in one case, a welding plant. Two, which also have short bodies, are fitted with rear-mounted HMF cranes and used for bridge maintenance, and the remaining couple have longer bodies for carrying scaffold equipment.

Bevan Specialist Products operates from a factory in Stone, Staffordshire, and has just celebrated its first anniversary, following the acquisition by West Midlands-based Bevan Group of the former Stag Bodies.

Jason Clement, procurement co-ordinator at Amey, commented: “We’ve been impressed by Bevan’s all-round package, which includes its service as well as the vehicles themselves.

“Bevan’s build quality is very good, of course, and its pricing keen. Quotes are invariably turned around very rapidly but are also thorough and ‘to the brief’, while the bodybuilder’s Bevan Passport scheme is a brilliant in assisting us to secure Individual Type Approvals on our vehicles with minimum of hassle.”