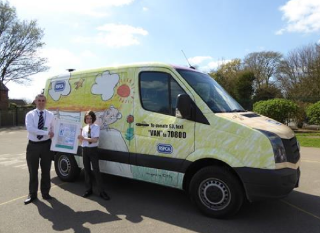 The latest vehicle, which features the design by the competition’s youngest winner, Kitty Wright from Derby, will join the other RSPCA ‘Networking Project’ vehicles, transporting animals around the country as part of the charity’s rehoming programme.

The six vehicles are part of an ongoing partnership between the animal welfare charity and Volkswagen Commercial Vehicles and will help the RSPCA move rescued and abandoned animals around 17 shelters in England and Wales.

The converted short wheelbase CR30 2.0-litre TDI 136 PS BlueMotion Crafter vans feature a bespoke load-carrying area that allows the charity to transport the animals and equipment safely between shelters in England and Wales.

Each van has been fully lined with a waterproof material to aid with cleaning and hygiene, and fitted with a ‘Flettner Ventilator to ensure constant fresh air for the animals as well as nine bespoke cages that can be adapted in size, depending on the animals being transported.

Kat Litchfield, the RSPCA’s senior corporate account manager, said: “These vehicles really stand out on the road and make you smile when you see them. The other project vans have already been working hard and due to the Crafter’s efficient engines and impressive load-space we have been able to carry a number of animals at once, making the project a great deal more cost-effective in the long-term.”