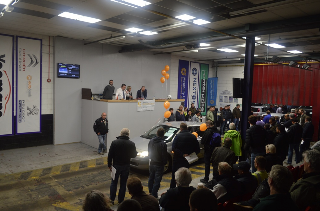 On more than one occasion, traders and buyers purchased lots, only to donate them back into the auction to maximise funds.

One vehicle donated from Frosts Cars starting bidding at four times its set price, with the trader placing it back on their forecourt.

Shoreham waived all fees for each vehicle donated and pledged an extra £250 for each sale.

The amount generated approached the total funds raised by Shoreham for Chestnut Tree House, since first supporting the Arundel-based hospice in 2010.

Shoreham had been hoping to raise just under £7,000 for Chestnut Tree House at the auction; the amount needed to fund a day of services at Chestnut Tree House. With more than double the targeted amount raised, Shoreham can help to fund two whole days of care.

“We are extremely grateful and touched by the generosity of the motor trade in Sussex and the surrounding areas, not to mention the audience of new and existing buyers, who ensured that it was a fantastic evening,” commented Alex Wright, managing director of Shoreham Vehicle Auctions. “We couldn’t believe the final totals; everyone at Shoreham is ecstatic with the money raised, which will make a real difference to this fantastic and humbling cause.”